Timing is everything in the brain.

When a head injury, disease or behavioral disorder disrupts that carefully synchronized cranial clock, everything from breathing and body movements to intellect and emotion can be undermined. 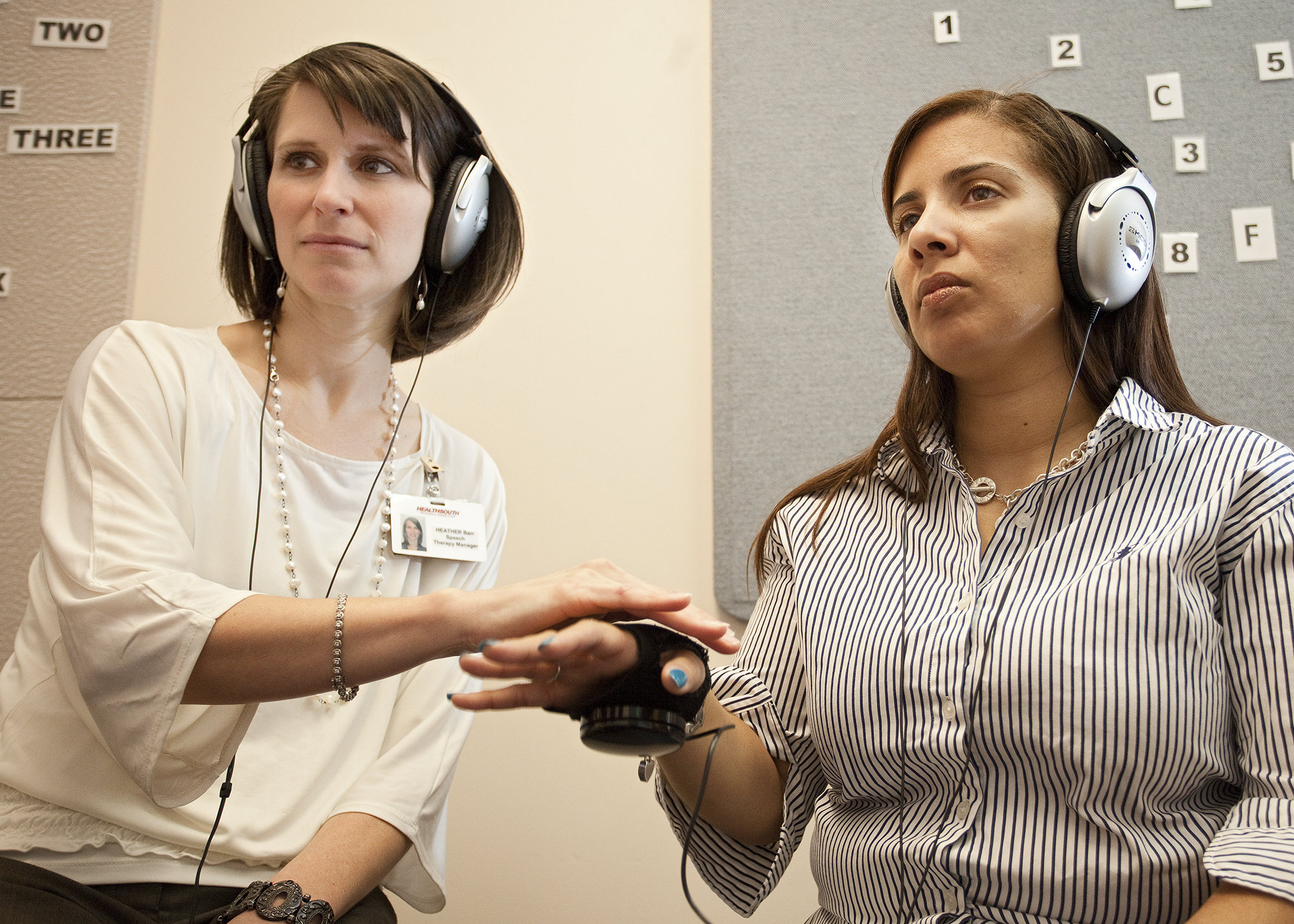 But a relatively new therapy known as Interactive Metronome has restored the internal timepiece in the brain of many patients with autism, cerebral palsy, ADHD, stroke, traumatic brain injury and other cognitive disorders.

Interactive Metronome looks more like an entertaining video game than an advanced auditory therapy, but reaching a new level in this computer-generated game means restored function, and in many cases, a restored life.

For Julie Sterner, 33, of Conewago Twp., the therapy helped her get back to full function as a middle school principal in Dover.

Sterner suffered a severe concussion last May while jumping with her students in an inflatable “bounce house.” After hitting her head squarely in the back, she experienced a severe headache, tunnel vision, loss of balance and memory loss. She went to the doctor, who sent her to the emergency room at York Hospital, where a CT scan confirmed a concussion. She was then referred to a neurologist who recommended speech and physical therapy.

Sterner rapidly realized that “speech therapy” involved far more than just learning to form words. It involved restoring the connections in her brain that controlled everything from language development and concentration to memory and motor skills.

Her main post-concussive symptom was an inability to multi-task, Sterner said. The mother of a 6-year-old boy, she found that after her head injury she could no longer do laundry and cook dinner at the same time, drive a car while listening to the radio, or switch from email to phone to face-to-face conversation.

The sensory overload of the school cafeteria completely overwhelmed her, and she missed four months of work.

Interactive Metronome treatment at HealthSouth York helped get her back on track. During the therapy, Sterner was hooked up to a computer to literally “break my brain into pieces,” she said. It forced her to focus on one task at a time.

She would put on headphones and a hand sensor, and then clap to a rhythmic cowbell sound. The computer registered how quickly she reacted to the cowbell, measured in milliseconds. The goal is to earn lower and lower numbers, she said, reflecting the patient’s ability to synchronize a range of hand and foot exercises to a precise computer-generated reference tone. “It mimics multi-tasking,” Sterner said.

Sterner went to treatment three times a week for three months at first, then as she improved, phased down to once a week.

Heather Barr, Sterner’s speech pathologist at HealthSouth York, likens the treatment to the Dance, Dance Revolution game, where participants follow complicated dance moves on a TV screen. She said when Sterner first came to her, she was a classic concussive patient. She seemed to be “not there.” She was “expressionless,” and her “eyes were glazed over.”

When they first started the therapy, Sterner had no rhythm or flow. Her initial output was “very unorganized, uncoordinated,” Barr said. At the end of treatment, Sterner’s brain output was like a classical dance, “all put together,” with the fluidity restored.

“The brain is like a superhighway,” Barr said. A concussion invades this system with a series of detours and clogged traffic. “IM helps reconnect those highways in the brain,” allowing patients to take a different road to get to the same place.

Interactive Metronome promotes “neuroplasticity,” or the brain’s ability to change as a result of input from the environment, Barr said. Because the brain is bendable, patients can re-learn to do something in another way.

Tammy Sarracino and Nancy Mallis, co-owners of TherAbilities in Lower Paxton Twp., have been using the Interactive Metronome therapy for more than a decade, primarily in the treatment of children with ADHD, autism spectrum disorders, sensory processing and what Mallis classifies as “self-regulation challenges.” They believe strongly in its effectiveness.

“There is evidence to show that timing and rhythmicity as well as motor planning and sequencing have a strong relationship to attention-related behaviors and higher level cognitive abilities,” said Mallis, TherAbilities’ clinical director. “This program works on these areas through its structured motor, auditory and visual feedback approach.”

The intervention is also offered through Mynd Works, as part of Jewish Family Services of Greater Harrisburg Inc. in Susquehanna Twp., as well as more than 2,000 hospitals, clinics and universities across the world.

Barr, who has been certified in Interactive Metronome therapy for seven years, said, when it comes to the timing of treatment, “Better late than never, but earlier is always better.”

The IM program was developed in 1992 by Jim Cassily, an acoustical engineer who moonlighted as a music teacher. Cassily noticed that the traditional metronome used in his music class helped students in a special-needs class with their timing, focus and concentration. He teamed up with Dr. Stanley Greenspan, a child development expert, to create the patented IM system.

Sterner said she now has a whole new understanding of her students with attention deficit disorder and concussions. She is amazed at the results of her therapy, and urges patients to talk to their doctor to see if this treatment can retrain their brain and restore that all-important sense of timing.

Written By DIANE WHITE MCNAUGHTON For The Patriot-News

Read the article from the source here