Nicole Dye-Anderson credits roller-skating lessons with alleviating her daughter's ADHD symptoms.It was Jenna's skating coach who noticed the 11-year-old seemed to prefer her left side over her right. She suggested physical therapy to improve Jenna's balance.

That's how Jenna wound up at Nemours/Alfred I. duPont Hospital for Children using the Interactive Metronome, a computer-based rhythm program that uses simultaneous sound and images to help with the brain's processing, specifically when it comes to attention, motor planning and sequencing.

The twice-weekly appointments helped restore Jenna's balance between her left and right side, but the improvements have gone beyond her performance in the skating rink.

Her standardized test scores improved. She seems more on top of her schoolwork and what she needs to do to get it done. Most impressive, Dye-Anderson said, her daughter no longer needs her medication to manage her attention deficit hyperactivity disorder.

"Her teachers even asked me if there was something different at home because they noticed," said Dye-Anderson, who lives in Pike Creek. "It's the little things you can tell. The small reminders that you do as a parent, I've had to do less and less. There's something going on that wasn't there before." 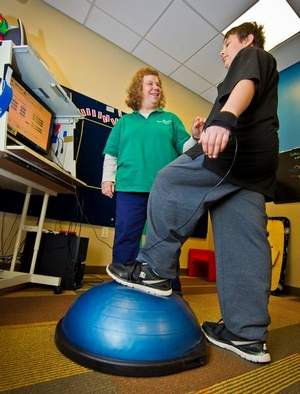 Not just for kids
Interactive Metronome was first developed almost two decades ago to help children diagnosed with learning disabilities, attention and motor problems. But in recent years it also has been used with adults dealing with traumatic brain injury, stroke and Parkinson's disease. Researchers in North Carolina are using the program with veterans to help them regain the natural rhythm of walking. Even some professional hockey players have used Interactive Metronome to improve speed and reaction time.

Sheri Dawson, a physical therapist at duPont Hospital, said the computerized program helps improve the brain's processing, specifically attention, motor planning and sequencing. The goal is to cause changes in the brain's functional neuroplasticity, which is how the brain changes in structure and function as a result of learning.

The program can benefit children with sensory integration and autism spectrum disorders, ADD/ADHD, cerebral palsy and developmental coordination disorders. Most patients are about 6 years old when they start at duPont, although children as young as 18 months have used the program, Dawson said.

Interactive Metronome combines sounds, audible through speakers or headphones, with pictures on a computer screen. Participants try to match hand and foot exercises to the sounds and pictures. As patients progress, other challenges can be added to improve response, such as guide tones that sound depending on whether they respond early, later or on rhythm. Repetition is the key.

It may sound easy, but it takes plenty of effort to respond with the clap or stomp in time to audible and visual cues. But the changes that result can be long-lasting, Dawson said.

"It's doing a lot of work. We will see kids cognitively fatigue early on," she said. "They are mentally fatigued by this, but that's something we record and we can change if needed."

The challenge was something Jenna looked forward to, Dye-Anderson said.

"At first, she was nervous. She asked me, 'Mommy, is something wrong with me?' " her mother said. "But as it went on, she really loved going. It was heart-breaking when our time came to an end."

Results abound
Some research studies on Interactive Metronome suggest the potential for the program to help a variety of patients. Patients with ADHD symptoms have shown improvement in attention span, behavior and motor control. A pilot study of stroke patients found it a feasible intervention, although noted more studies are needed.

Dawson said parents are interested to hear about Interactive Metronome, which is usually covered by insurance when part of a prescribed therapy, because it doesn't involve medication.

"It's conservative. It's something different," said Dawson, adding that she typically has a waiting list for patients. "If families have tried different approaches that haven't worked, they want to give it a try."

Amy Casper's son, Andrew, has only had two therapeutic sessions at duPont using Interactive Metronome with the hope of improving his left-right coordination and boosting his writing and keyboarding speed. But already he has noticed an improvement in art class, an area that has been a source of struggle for him. He also thinks he's a little faster on the keyboard, which can help him participate better in class.

"Just that's a big self-esteem booster for him," said Casper, of Gilbertsville, Pa. "Being able to write down a homework assignment, something so simple the rest of us can do, is very taxing on him. He's looking for something to level the playing field. We've got a lot of hope for this."