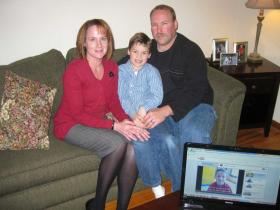 When Brenda and Richard Davis talk about their 9-year-old son, Aaron, they find it impossible to hold back their tears.

A year ago, Aaron, who was diagnosed at age 5 with attention deficit hyperactivity disorder, had difficulty making eye contact and having a conversation. He couldn’t follow directions and was lagging behind in school by several years.

That began to change last spring after the Davises heard about Interactive Metronome and decided to see if it would help their son. Interactive Metronome is a clinically proven computer-based assessment and treatment tool that has helped children with developmental challenges improve their cognitive, behavioral, social and motor skills.

Interactive Metronome requires a child to wear headphones through which a computer-generated beat is heard. The child tries to hit a hand or foot trigger in time with the beat. Directional sounds and lights guide the child to speed up or slow down to match the beat.

IM improves the child’s cognitive abilities by using exercises targeted to improve the brain’s inherent ability to repair or remodel itself through a process called neuroplasticity. Also known as cortical remapping, neuroplasticity involves the molding and growing of neurons through experience.

In addition to helping children, the tool has been successful in adults who have experienced a stroke or have Parkinson’s disease or other medical conditions.

SEARCH FOR A SOLUTION

The Davises said they first noticed Aaron’s development was atypical when he wasn’t talking or walking at age 16 months.

“When he was about 3½, we realized something wasn’t right,” Richard said.

Staff at the preschool Aaron was attending suggested he be evaluated to see if his hearing and eyesight were OK. Those assessments were normal, but Aaron eventually was asked to leave because the preschool didn’t have the resources to meet his needs. Aaron enrolled at Mater Dei Catholic School and with one-on-one instruction was able to finish preschool.

“When he started kindergarten, it was a struggle from day one,” his father said, explaining Aaron had been placed on medication by that time.

Aaron attended kindergarten for a half-day and then participated in Family Services and Guidance Center’s Oasis, a program for kindergarten age children who have difficulty succeeding in a full-day classroom.

Aaron, who now uses a Daytrana patch with ADHD medication and takes a small dose of high blood pressure medication that helps calm his behavior, continued to lag behind his peers at school, even though the school provided an after-school tutor, paraprofessional and occupational therapy.

“When he walked into the school, his head was always down and he wouldn’t acknowledge anyone else. He was in his own world,” his mother said, describing Aaron’s behavior last spring when he was in the third grade. “He was content to play by himself. He would walk around and pick up rocks during recess. He couldn’t tell you what he did in school or who he sat by.”

The Davises had heard about Interactive Metronome from the parents of a child who attended preschool with Aaron. When the school could no longer provide an after-school tutor for Aaron, they decided to give the computer-based tool a try.

“When we found out about the Metronome, I was skeptical,” Brenda said. “Richard convinced me (to give it a try).”

In January, the Davises made an appointment for Aaron with Lori Schmidt, who runs IM Focused, a Topeka learning center specializing in the treatment of children who are falling behind their peers in academic, social or physical coordination skills.

After an assessment and an initial 20-minute session using Interactive Metronome, the Davises were already seeing gains. Aaron was able to follow directions better.

“The skeptical me said this was a fluke,” Brenda said.

Aaron completed 75-minute sessions three days a week through the end of March. The duration and frequency of sessions vary according to an individual’s needs.

As time went on, the number of beats Aaron could match increased, which meant his central nervous system was maturing so his brain was functioning better.

Schmidt, a certified IM provider who formerly taught special education classes, said she first learned about Interactive Metronome in 2002 when her son was struggling in high school. Although he was in the gifted program, he was on medication for attention deficit disorder. His physician suggested they give IM a try.

Since then, her son has graduated from Kansas State University, went on to earn a master’s degree at Rockhurst College in Kansas City, Mo., and is working as an occupational therapist in Hutchinson.

Schmidt said her clients — 90 percent are students and 10 percent are adults — typically attend sessions from three to five days a week for one to two months.

“It’s an intense program,” she said. “The key is repetition and providing the right challenge. The goal is to match it perfectly. The closer to the beat, the more accurate and efficient the neutral network is.”

Schmidt said the improvements made from Interactive Metronome are permanent and can be built upon.

“Once a gain is made, you never lose it,” she said. “It’s like learning to ride a bike. Once you learn it, you have it, but you can always go further.”

Interactive Metronome is offered at other agencies in Topeka, such as Kansas Rehabilitation, she said. Insurance covers IM if provided by an occupational therapist but won’t cover the sessions from private-pay providers like Schmidt.

Aaron will complete another round of IM in January. Richard said that, individual training of IM costs about $1,200. If done on a group basis, a session is $750 per person.

The Davises believe the sessions are worth every penny. When Aaron enters his school now, his head is up, Brenda said. He stops by classrooms to say hello to his teachers, and he plays kickball with his classmates. He is able to have detailed conversations and answer questions.

His handwriting has improved, and he no longer needs occupational therapy. He sings and tells jokes.

Last January, Aaron scored 28 percent on the reading assessment test. This month, the assessment test indicated his reading score had soared to 90 percent.

“The teacher picked him to be the leader for a group and to make sure everyone was on track,” his mother said, as she struggled not to cry. “The teacher said he did an excellent job.”

Read the article in the original source: The Topeka Capital Journal