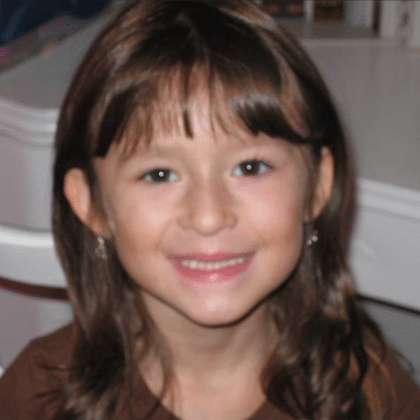 Miranda is a beautiful little girl who has a twin sister. Although Miranda and her sister looked similar, developmentally they were not. Miranda was mildly delayed in most developmental milestones. Before Miranda was one-year-old she experienced chronic ear infections. Around 2 years old she had tonsils and adenoids removed and tubes inserted. At 2 years old her delay in speech was first professionally addressed and she was seen continuously thereafter. Miranda was painfully shy and anxious. Her articulation was so severe that a stranger could not understand her without interpretive assistance from her family. Miranda seemed to derive all of her social praise for how beautifully dressed and coordinated her outfits were, with her ribbons in her hair, earrings in her ears and darling shoes, while her twin sister did not seem at all concerned with her own style of dress.

Her therapist determined that due to the severity of her Auditory Processing Disorder, Miranda was not a good candidate for the Fast ForWord program. Miranda was in a home-school setting with a private tutor, but prior to enrolling with Merritt Speech & Learning she was not making any progress in learning. Since traditional speech therapy had only been “some- what” beneficial it was determined that Miranda was best suited for the Early Intervention Program.

It was requested that Miranda come to therapy wearing comfortable clothes, such as jeans and tennis shoes and to pull her long hair back into a ponytail. Miranda was not happy about having to wear jeans and tennis shoes. She was very unhappy about having to take off her dangly earrings. At the end of each session, she would run out to her tutor to put her earrings on and let her hair down.

Early Intervention Program designed by Dana Merritt, MS-SLP and utilizing the Interactive Metronome was implemented. IM provided excellent auditory stimulation to the auditory cortex, while the clinician moved the child through five different modified exercises. The movements were done for Miranda within a 30-millisecond window of time to maximize the most ideal immediate auditory feedback for her. The child was simultaneously presented excellent stimulation through the “ear gates”, the “eye gates” and the “motorgates” to develop multiple association fibers between the auditory, visual and motor areas of the developing brain. Young children or severely impaired patients can be moved through this Early Intervention Program. Through these modified exercises these patients can make significant progress in their overall coordination, communication and cognitive skills. This procedure with Interactive Metronome’s patented guidance system provided a structured, goal oriented treatment protocol.

Miranda completed fifteen sessions of therapy using the IM, being seen three times a week, for five weeks. By the third session her tutor was commenting on the significant difference in the Miranda’s intelligibility during conversational speech. She was noticing that Miranda was using longer sentences incorporating new words in her expressive vocabulary. Miranda continued to show dramatic progress in every area of speech, language and learning.

Prior to enrolling in the Early Intervention Program Miranda could not even say her own name clearly, nor could she say the name of her twin or her older sister. By the conclusion of therapy, she was saying all of these names with much better intelligibility. Both parents were very pleased with the dramatic difference in her speech and in the relatively short period of time that the therapy took. Miranda’s parents are thrilled with the progress she has made.

Once the Early Intervention Program with IM was complete the family was so pleased with the results that they gave Miranda a much-deserved break from speech therapy. Recently her mother contacted Merritt Speech and Learning and said that they are seriously considering enrolling both twins in a private school where they would have the benefit of greater socialization. Miranda has become an outgoing, communicative sweet little girl. She has always had a flair for dressing with style and now.