Jim Cassily was the inventor of the patented technology behind Interactive Metronome®.  Through a serendipitous set of events I recently learned about the early days of his development of the original “time machine.”  The purpose of this post is to share a portion of Jim Cassily’s role in the IM story.  I give special thanks to Jim’s wife, Katie, who has graciously supplied me with original documents, pictures, and anecdotes regarding Jim’s passion for sharing the technology he developed to improve the lives of others.  I consider it an honor to amplify a portion of Jim’s legacy via efforts to share information regarding the brain-based mechanisms involved in the IM neurotechnology (see Brain Clock blog). 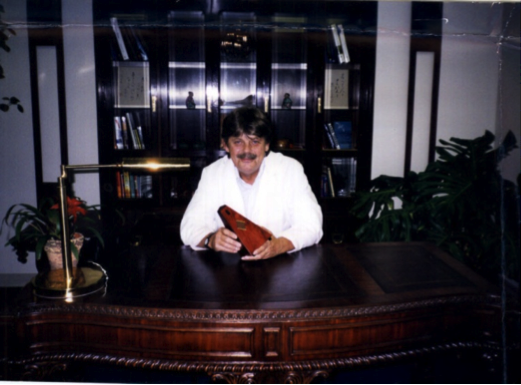 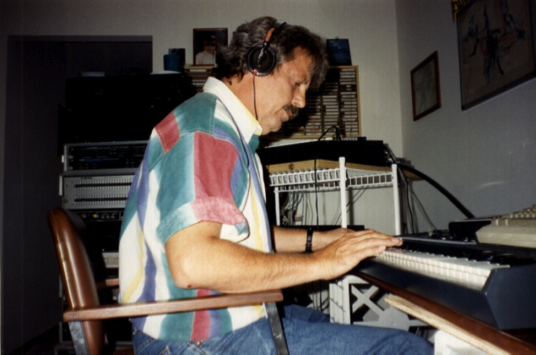 Jim in his office/studio where the “time machine” was given birth. 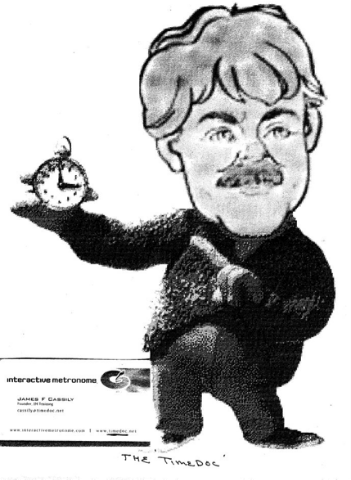 The Time Doc nickname was apparently given to Jim by the children he worked with in his Cassily Clinic in Grand Rapids, Michigan.  Of interest is one story that the clinic entry area included a toy Yoda (from Star Wars) to remind the  children to “don’t try, just do.”  Later the clinic moved to Cascade, MI and this is where early discussions occurred about various research ideas in what Jim called the IM Research Center.  Early press coverage of Jim’s clinic was published in a 2000 article in the Grand Rapids Press.

As documented in his own words, the purpose of the original 1993 PC-based (Microsoft Windows 95/98) Interactive Metronome was “to help athletes and musicians improve their timing, rhythmicity, coordination and focus.  However, it was quickly discovered that training with this physically and aurally interactive version of the traditional metronome yielded unprecedented improvement in children with debilitating cognitive, as well as, physical based disorders.”

Below is a picture of the original “time machine.”  If one looks close one can see dials for adjusting tempo, the reference beat, the pitch for the “right-on” feedback tone, loudness of tones &  the reference beat, and monitoring the number of responses right in a row.  These technological elements are still present in today’s sleek and small IM units.  Although miniaturization has reduced the size of the original “time machine”, the basic ingredients of the IM technology were present in this original unit (circa early 1990’s). 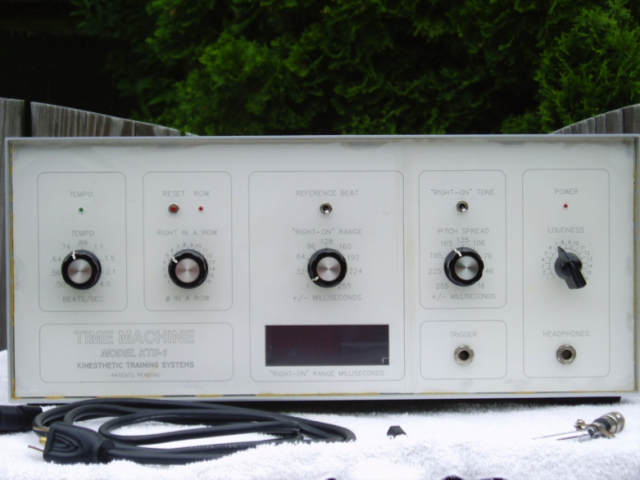 The Travel and Adventures of Jim Cassily and his Time Machine

The development of the original IM time machine was the result of Jim’s purpose- and passion-driven career, sprinkled with a bit of serendipity (“Chance favors the prepared mind” – Louis Pasteur).

Jim’s career started in the music industry as a record producer and engineer for albums recorded by Atlantic, Warner Brothers, Westbound, Capital, Columbia and other record companies (see Jim’s resume up to 1999 for more details).  He spent 20 years producing and engineering records for musicians and bands such as Teegarden & VinWinkle, Bob Seeger, Janis Joplin, Destroy All Monsters (The Stooges), Motor City Mutants and R & B groups such as Ohio Players and Funkadelic.  His skills and experiences in recording engineering and equipment design resulted in a number of technical innovations in private satellite television, broadcast/recording psychoacoustic audio signal processes, and accretion based costal expansion technology.  Toss in formal education in child psychology and a personal interest in audiology and the stage was set for the incubation of the idea for IM.

Through Jim’s musical recording and production experience he recognized that aspiring musicians and athletes needed to develop “natural timing” in order to increase their chance of success.  According to Jim (emphasis was in original text),

“In music, this natural timing is simply called the cook, in sports its call being in the zone.  The musical cook allows musicians to play very accurately, yet smoothly and expressively, for extended periods of time without conscious effort.  The cook also acts like a magnet that pulls the musicians together into a cohesive unit.  It gives music the special feeling that creates hit records and pulls concert audiences cheering to their feet.  Similarly, the zone, gives Michael Jordan the ability to do what he does on the basketball court.”

According to documents written by Jim, he spent nearly two decades contemplating these personal insights and pondering how to invent a tool to train natural timing.  It was not until the 1980’s when digital sound technology and high speed computers made it affordable and possible. The following is a copy of the original diagram for what was then called the Autonomic Timing Analyzer & Training System (ATTS), which was then owned by the company called Kinesthetic Training Systems.

As documented in an unpublished manuscript, Jim described the ATTS as the following—“the KTS-1 Time Machine is the world’s only interactive metronome.  The original purpose was to help serious musicians master their artistic craft.  However, its profound human developmental, rehabilitation and sensory integration capabilities have propelled the patented KTS-1 far beyond its original intent.”  In 1995 Jim authored a number of unpublished manuscripts describing the potential intervention benefits of his time machine.  These papers can be viewed at the links below.  A reading of these papers makes it obvious that Jim was aware of the potential intervention benefits of his time machine and was passionate in his attempts to explain the technology and to seek to integrate it in educational and therapeutic programs.

Shortly thereafter Jim developed and filed the first patent for a working prototype of the time machine.  The abstract description of the original patent (April 13, 2004), issued to the then named company Synaptic, is below.

Subsequently, when the company Interactive Metronome was formed, the abstracted description of the patented technology (dated October 17, 2006) was as follows:

A fascinating twist to the IM story is the fact that, according to Jim:

By chance, it turned out that my first IM beta field training experience wasn’t with musicians.  At the urging of a personal friend who was also my doctor, my first IM trainees were children with severe motor skill development problems, and a man who had suffered a traumatic brain injury which destroyed much of the motor control area of his brain.  Everyone involved in the initial IM beta training quickly realized that the Interactive Metronome had profound human learning and analytical capabilities that go far beyond its original limited intent.

According to Jim’s wife Katie, some of his first “aha” experiences where when he used rhythm (without the IM technology) to help a friends youngster learn the piano and helped another client, who had difficulty walking with a prosthetic, learn to walk efficiently and independently with an early designed mechanism attached to the prosthetic that was in turn sending and receiving signals from the original time machine.

Clearly this was not the original intent of IM as conceptualized by Jim.  But, it reflects the thinking of “a prepared mind.”  A quote from Merton and Barber’s “The Travels and Adventures of Serendipity” (2006) seems to capture of Jim’s appreciation and recognition of the importance of serendipity in his discovery of the therapeutic potential of his time machine.

Many a scientific adventurer sails the uncharted seas and sets his course for a certain objective only to find unknown land and unsuspected ports in strange parts. To reach such harbors, he must ship and sail, do and dare; he must quest and question. These chance discoveries are called “accidental” but there is nothing fortuitous about them, for laggards drift by a haven that may be a heaven. They pass by ports of opportunity. Only the determined sailor, who is not afraid to seek, to work, to try, who is inquisitive and alert to find, will come back to his home port with discovery in his cargo (p. 177)

An interesting story, not known by many, is that Jim worked with a Celtic band named Fonnmhór to improve the quality of their music.  According to a 2003 article in Grammy Magazine, “technical proficiency and exceptional timing are essential to creating Fonnmhór’s music, a blend of fast-tempo, melodically intricate traditional Irish music mixed with contemporary rock rhythm.”  I have a copy of the CD and have been listening to it as I was reading many of the background documents for this post.  It is excellent.  I would recommend reading the complete Grammy Magazine article as it provides nice snippets of the early days of the time machine that eventually became Interactive Metronome.

I hope that this brief overview, and supporting historical pictures and links to manuscripts, provides a historical context from which to view the current Interactive Metronome technology.  Many great innovations in different fields start with a visionary who is possessed with a passion and purpose for his or her ideas.  From my readings and communications with Jim’s wife Katie, it is clear that Jim was such a person.  He also benefited from serendipity, which in this context was clearly “chance favoring the prepared mind.”  His technical/engineering skills intersected with a love for good music, which spun off an idea that more-or-less, thru chance encounters, resulted in the discovery of IM’s potential as a brain fitness and rehabilitation neurotechnology.

I wish Jim was alive today so I could talk with him about my insights into what I believe his original time machine technology is doing to improve controlled attention and working memory—i.e., focus.  It is clear from his description of the “cook”, “zone” and “focus” that he knew that IM was making an impact on what we now call controlled attention and focus.  My research and theorization regarding the underlying mechanisms of the IM effect are only possible given Jim’s developments.  As stated by Isaac Newton in a letter to Robert Hooke in 1676:

If I have seen farther, it is by standing on the shoulders of giants.

Jim is one of many giants upon whose shoulders I have stood in my professional career.