My first conclusion is that IM is challenging!  When I tell others that I am using a high-tech “clapping” machine that uses a cowbell sound, I am typically greeted with skepticism, much like my original skepticism.  It sounds simple and easy.  Trust me–it is a very cognitively demanding therapy.

Being an extremely visually oriented person with expertise in the analysis of numbers (applied psychometrics and statistics), I immediately gravitated to the IM visual and numeric feedback on the computer screen.  In fact, I focused almost exclusively on the numbers.  I more-or-less ignored the auditory feedback in my ears.  Within a week I found it relatively easy to be “on target” and when off target, quickly and automatically adjust my pace to be in synch with my tireless IM taskmaster.  However, I found that when I was in a groove and being “super right- on” (exactly on the beat) for a number of consecutive trials, my mind would start to wander to random thoughts.  No sooner would my mind wander for a brief second then the feedback told me that I was no longer in rhythm.  This happened constantly.  Just when I was feeling like I had mastered the task, my mind would always start wandering.

During one of my weekly consults with my IM-Home Specialist, April Christopherson, OTR/L, she told me that in order to master IM I needed to close my eyes or turn my back to the visual and numeric feedback.  I needed to rely on the sound tones delivered through the headphones.  So I followed her directions and immediately was constantly out-of-synch.  I had a hard time differentiating the sounds sent to the right or left ear.  At times I occasionally found myself “chasing the wrong tone.”  That is, I focused on the guide tone from the left ear (indicating I was clapping too fast) and thought it was the target instead of paying attention to the metronome sound.  I was chasing my tail.  Needless to say, I would become seriously derailed, and I would need to peek at the screen to establish what I was doing wrong.  But I persisted and eventually I learned to focus harder on the auditory feedback.

I again found myself getting on target for a decent series of consecutive trials, but as sure as it snows in Minnesota, my string would be broken by a stray thought.  The only way to produce a lengthy string of synchronized bursts was to attain a level of focus or concentration that was, frankly, foreign to me.  Although this may sound corny, I “had to become one with the tone”…I had to “be the tone.”  This required me to focus all my mental energies on the “on target” tone occurring in the middle of my head and suppress any random or spontaneous thoughts that tried to capture my attention.

In the cognitive psychology literature, attentional capture is minimized by a process called inhibition (ignoring task irrelevant distractions–in my case, self-generated random thoughts).  Not only must I resist alternative thought temptation, I must also shift and allocate my attention in a flexible and optimal way in response to different types of auditory feedback.  Finally, although not consciously aware of the process, my personal mind manager must constantly monitor the feedback and update my immediate working memory so my mind can adjust and correct my tempo.  Inhibition, shifting, and updating are the three primary cognitive processes believed to be involved in each person’s personal mind manager–collectively referred to as the executive functions of the brain.  I will discuss these cognitive concepts in future posts.

I have always had a very active or busy mind, even when performing other tasks.  Such an unquiet mind has contributed to my professional success as I am constantly thinking of new ideas, hypothesis, solving problems, or generating new insights.  When I talk to others about the degree of my spontaneous self-talk, I’ve concluded that I am at the high end of the population for a busy mind.  Sustained concentration, vigilance, or focus has never been a personal strength.  I have been rewarded for my intellectual insights, curiosity, and creative output.  A spontaneous self-generating mode of constant thinking has suited much of my professional work.  In IM-Home, I have met an opponent that can dominate me if I don’t marshal all my attentional resources.

Currently, the clapping machine owns me.  For me, synchronized metronome clapping is a new challenge–a challenge requiring me to learn more sustained and controlled focus.  I must stay in the immediate awareness with the tones.  When I become “one with the ‘right-on’ tone”, I am in a cognitive place I have seldom visited.  I have yet to find the vocabulary to describe the sensation of a long burst of success on consecutive IM trials, as to stop to describe it requires my mind to wander away from what it is I am trying to describe.  I have tried to evaluate the sensation of these glimpses of super focus, but inevitably my attempts are short-lived as I am scolded with tones to either my right or left ear, reminders that I am no longer in rhythm.  Maybe this state is what people with exceptional focus call “being in the zone” or in a state of “flow“, which is the single-minded emersion in a single activity that draws on focused motivation and attention. 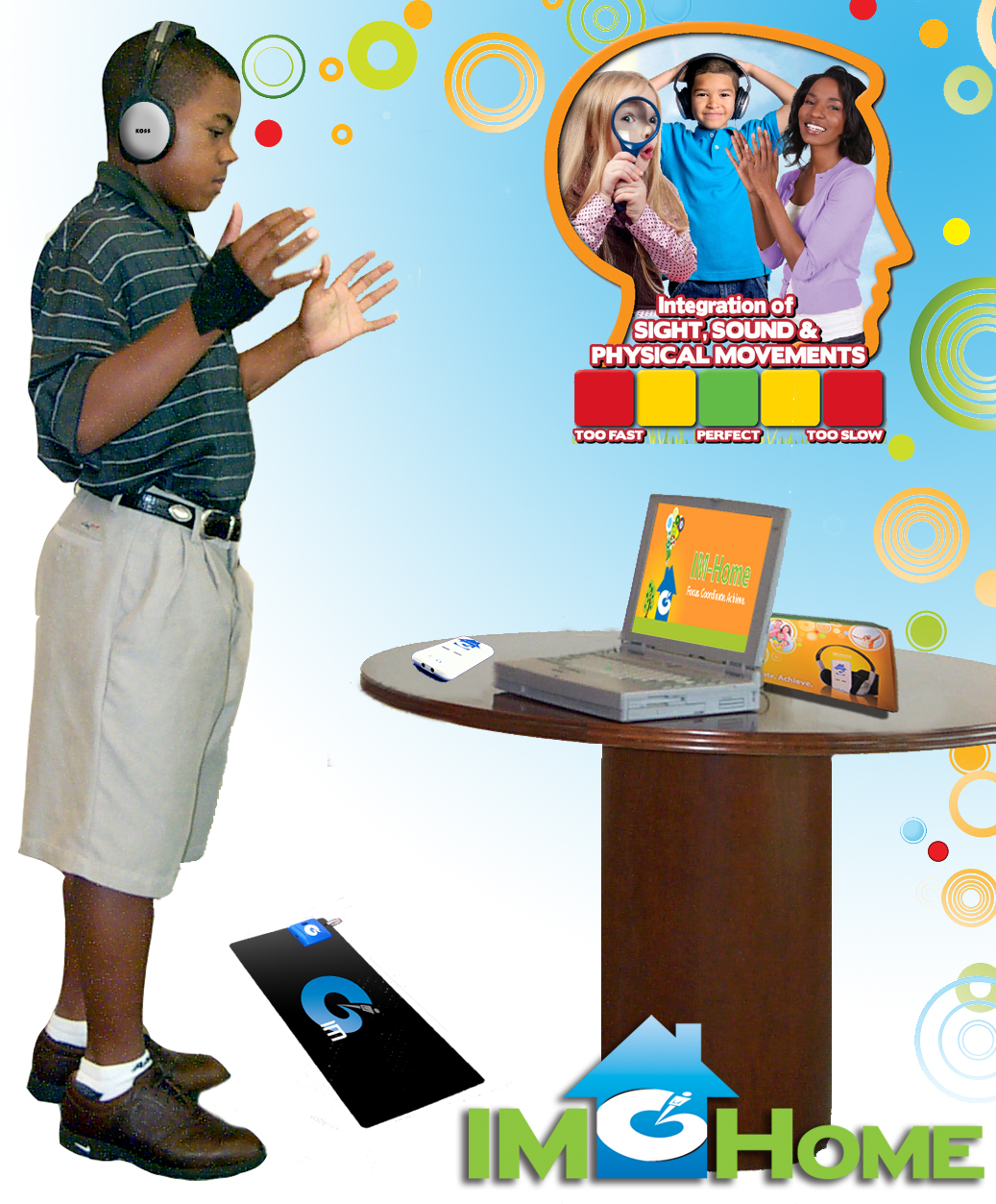 My personal experience-based professional task analysis implicates the psychological abilities of executive function (click here and here), controlled attention, and working memory, brain functions I have hypothesized to be central to the IM-effect.  How these cognitive functions are related to brain timing will be the topic of future posts.

It is clear to me that IM is a very challenging task for individuals who have poor or under-utilized focus or controlled attention.  My sessions are forcing me to shut down my default brain network (which is the network that has been described as producing REST–rapid episodic spontaneous thinking; click here and here), invoke my executive function manager processes, and focus on controlling my attention.  Mind-wandering is not allowed.  It must be suppressed.  I am both frustrated and excited when completing my sessions.  I am being pushed to the edge of my personal attentional control envelope.

Yes—but have the sessions transferred to real world behaviors?  Have I seen any improvement in focus during my day-to-day functioning?  Although it is possible that I may be trying to convince myself of the value of my time spent on IM training, I have had two recent episodes of what I viewed as enhanced focus.  Last Friday (after completion of my 13th IM-Home session) I had an exceptionally productive morning work session.  I was juggling multiple projects and responding to phone calls and emails.  When I looked up I discovered it was almost noon.  Time had flown.  More importantly, I felt I had worked more efficiently.  I had been productive on multiple fronts and the work, which was at times difficult and challenging, was completed with serenity.  I did not need to write down every little thought or task to be completed later.  Instead, my mental checklist functioned without the aid of sticky notes.   Hmm…. could it be due to IM?

The second experience occurred three days later (after session 15) when I spent the majority of my day driving into and around town completing errands.  While driving I perceived a sense of clarity in my field of vision.  I was more aware of the various objects and the terrain ahead and around me.  I was attentive to cars farther down the road, was more conscious of changing traffic signals (both immediate and those further down the road), I was scanning the ditches for possible deer, etc.  Once I perceived this qualitatively different state of driving, I deliberately tried to sustain it via control of my focus.  I consciously was inhibiting my typical internal busy mind and was more aware of my immediate surroundings.  I found I was able to maintain this focused state for significant bursts of time (approximately 5 minutes for each burst of concentration).

Are these two incidents random experiences, an attempt to rationalize my IM therapy and relationship with the IM company, or… might they be flashes of improvement in ability to turn on and off my controlled attention due to my IM therapy?  I don’t know.  These are personal introspective observations and conclusions not subject to experimental investigation or measurement.  At this point in time I can only conclude that I know that during the IM sessions significant demands are placed on my executive functions and controlled attention.  Whether these two personal enhanced focus experiences are the direct outcome of IM is yet to be proven.  I do know that these two experiences are consistent with the brain clock research literature regarding the positive effects of fine-tuning the resolution of the human brain clock.

Finally, given that I am a high functioning, well-educated and successful professional, I can only imagine the potential benefits of IM-based therapies for children with clinical disorders (e.g., ADHD or Autism), particularly those that have controlled attention and executive function abilities that are seriously disrupted or delayed.  Also, given that contemporary neuroscience research has suggested that the areas of the brain responsible for the abilities that produce focus are the latest developing areas of the brain (the prefrontal cortex), typically not coming to full maturation until adolescence, it would only be logical that children and youth without clinical disorders would benefit from IM more than I.  I would predict more noticeable and immediate gains in those much younger than I, as their brains are more modifiable (often called neuroplasticity).  These speculations are consistent with my own research that demonstrated significant gains in reading skills in typical school-age children, as well as other IM-specific research with a variety of childhood clinical disorders.

I look forward to more sessions and personal data collection as I continue my personal and scientific IM journey.