IM Featured in the News: Train the Brain

From “Her Mind Magazine”:

It seems simple enough: Pull on some headphones, slip your hands into a pair of wired gloves and follow 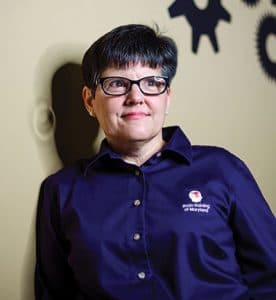 the prompts on the screen in front of you. When you hear a tone, tap the large red button in the center of your gloves by clapping your hands. Try to do this at exactly the same time as you hear the tone. Getting your timing right isn’t as easy as it looks, and the benefits from training on this system, called Interactive Metronome, are also greater than they may appear, according to Kate Ortman, founder and CEO of Brain Training of Maryland. Clients have reported improvements in coordination, memory and even sleep. In the summer of 2010, when Ortman started what would become a successful business, it wasn’t meant to be a business at all. Her motivation was much more personal. “I started this in self defense to help my own kid,” Ortman says.

Ortman was working as a certified life coach for teens and college students when she learned that her son, Dan, would need brain surgery. The complicated repair to his cerebellum required a long recovery, and Ortman realized she would have to put her career on hold to help her son. After lots of research, Ortman learned about Interactive Metronome (IM) and its potential use as a treatment for attention and focus issues. Thinking the system could help Dan, who was having trouble with timing and coordination following surgery, she looked for a local provider, but could find none. So, she became certified herself. IM was developed in the 1990s as a brainbased assessment, rehabilitation and training program with a way to objectively measure deficits and track improvement. It’s used in 5,000 clinics, hospitals and universities in the U.S. and Canada to help children and adults overcome attention, memory and coordination issues while improving cognitive and physical functioning.

As Ortman worked with her son, she started to see his motor functioning get better, and before long, his academics improved, too. As Dan’s condition improved, word got out. Friends who had children with
learning differences and 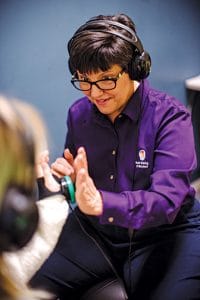 ADHD began asking for help, Ortman says. She initially invited clients into her home, providing IM training at her dining room table. Soon, her home wasn’t large enough to meet the demand. Ortman’s first clients were students struggling with ADHD who couldn’t remember to write down their homework assignments and had trouble focusing in class. After training with Ortman on IM, they reported improvements. Many eventually could take full college course loads without their parents’ constant oversight. “It’s about being able to focus and get through the mundane things,” Ortman says. “Parents would tell me, ‘It’s such a struggle to get the homework done.’ Then it’s not a struggle anymore.”

Of Brain Training, she says, “It’s not a miracle pill, but it helps your brain get healthier.” Since 2010, Brain Training of Maryland has expanded, adding more staff and programs. Eventually, Ortman moved the business to Columbia, where a bright office space is staffed by about a dozen trainers. Employees are certified in IM and other programs, including Integrated Listening Systems (iLs), Activate, MeMoves and Fast ForWord. Trainers are required to work with Interactive Metronome and other Brain Training programs for two to nine months before they can work with clients and are required to keep up their skills. Ortman’s staff is as passionate as she is about the programs. Some can even share personal experiences about how their own lives have been affected. Trainer Alicia Seelaus was an athlete throughout high school and played basketball as a student at Yale University. After she was sidelined following a number of concussions, Seelaus sought out Brain Training to help her regain her memory and cognitive skills. Consistent use of IM lead to steady improvement, she says, but she also noticed an unexpected result. “I sleep so much better now,” she says, “way better than I ever have.” Athletes often seek out Brain Training, some for concussion recovery, others to improve their timing and focus on the court or field. Ortman’s clients range in ages and abilities – from young students seeking help with focus or dyslexia to older folks who have suffered a stroke and want to regain memory and function. The Brain 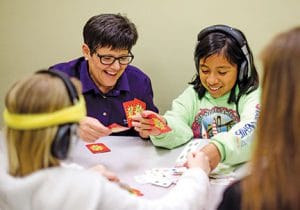 Training program can even help adopted children, says Ortman. “We work on calming the ‘fight or flight’ response,” helping children increase their self-control. The protocol, she says, helps to calm the central nervous system, enabling children to “connect better with themselves and others to establish healthier relationships.”

Ortman, who herself adopted three children, is a passionate advocate for adoption and foster care. Her four boys and two girls range in age from 21 to 31; the three eldest are her birth children, while the others were adopted. Her sons Dan and Greg and daughter Mary work alongside their mom as senior trainers at Brain Training. Client Renee Patrick of Burtonsville, who also has adopted children, says she feels a kinship with Ortman. Patrick’s three children, ages 10, 8 and 7, all attend Brain Training of Maryland. After Patrick’s children were diagnosed with ADHD, a friend whose children had the same diagnosis told her about Brain Training. She admits to being skeptical at first. “I am naturally suspicious,” she admits. But, she reasoned, “A chance to prevent ADHD from becoming an obstacle to success? Easy choice.” Patrick’s children work with iLs, IM and FastForword, a reading-focused program that is her personal favorite.

The programs work, she says, because they are individualized. Each one is geared to each specific child 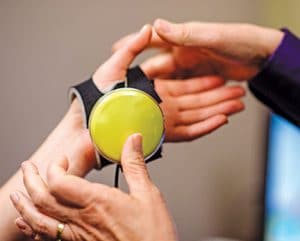 and provides specific help as well as measurable outcomes. “Brain Training operates under the premise that the brain can be trained or rewired,” she says. “They believe that improvement is possible.” Ortman says she frequently hears from skeptics, but most change their minds once they examine the research and experience the programs themselves. A few years ago, following the influx of online programs and smartphone apps claiming to improve brain function with the use of simple games, a “New York Times” article called the assertions into question. And in early 2016, the creators and marketers of the Lumosity “brain training” program agreed to settle Federal Trade Commission charges alleging that they deceived consumers with unfounded claims that Lumosity’s games could help users perform better at work and in school, and reduce or delay cognitive impairment associated with age and other serious health conditions, such as Alzheimer’s disease. Ortman says Brain Training of Maryland’s programs are more scientific than gamebased apps like Lumosity, and provide real neurological change.

“Some of the brain games are light versions of what we do,” she says, but the tools used by Brain Training of Maryland “are more foundational and benefit from solid science.” After dedicated training 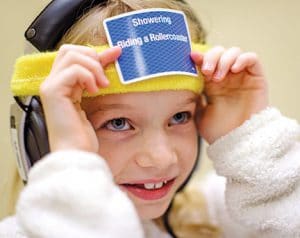 for between six and 12 months at the Brain Training offices and at home, she says, clients’ brains create new neuropathways and neuroconnections. And these results last. Like other things, when it comes to brain function, says Ortman, “You use it or you lose it.” Some clients, including those with neurodegenerative conditions such as dementia, require ongoing training, Ortman says. “And some have home equipment to use as a tune-up.” Health insurance companies do not cover the cost of brain training services, and Ortman acknowledges the programs can be a big investment. An initial evaluation and screening costs $200, and a 50-minute IM session at the office is $95. Purchasing an IM home unit costs $525, plus fees for set up and monitoring. Following the initial in-office screening, Brain Training staff members devise an individualized program, set goals and then measure success. For some, that comes within a few sessions, for others, it can take months of continued hard work. “Every brain is different,” Ortman says. “But we do get results with everyone who sticks with it.”

Among Ortman’s success stories is a 10-year-old girl whose sensory problems led to a severe lack of coordination. The girl came to the office recently grinning because she had scored a goal in a neighborhood soccer game. In another case, an elderly man struggling to recover from a stroke, finally succeeded in remembering his own children’s names. “His wife told me ‘you gave me my husband back,’” Ortman says. These clients’ stories – and the stories of her own children, prove to Ortman that the programs work. “We get results,” she says. It may require hard work and dedication, “but we get them.”*