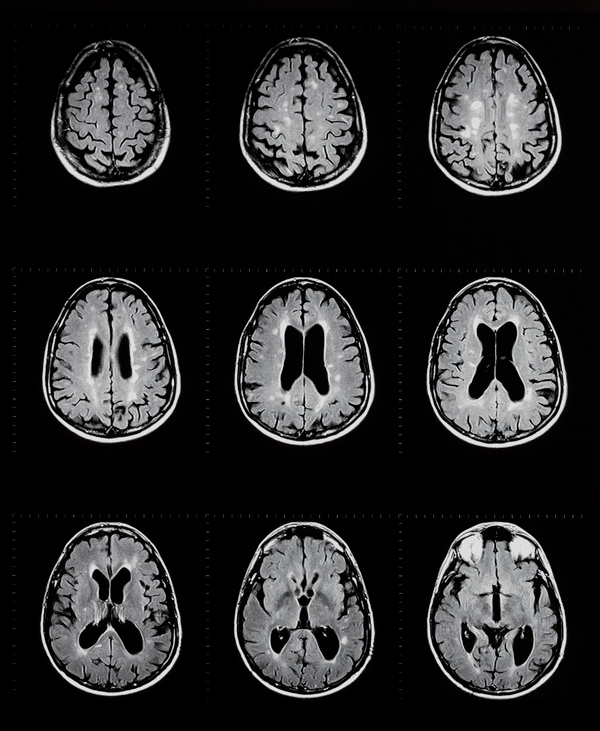 Deep inside your brain, electrical impulses are constantly firing…well, if you are reading this, they are still firing. These impulses travel through a complex system of neurons, glials, oligodendrocytes, Schwann cells, synapses and axons, all the while carrying information between white matter, grey matter, the spinal cord and the peripheral nervous system. In a way, the axons are the “wiring” for your body. These nerve fibers are the brain’s information highways; they carry electrical impulses to muscles, glands and other neurons.

Normally, this process goes along smoothly, but with multiple sclerosis (MS), T-cells, variations of white blood cells used by the immune system, attack the myelin sheath that protects axons. This causes lesions or plaque scars (sclerae), especially on the white matter of the brain stem, spinal cord, basal ganglia and optic nerve. The combination of the scarring and inflammation damages the protective myelin sheath. Although the body can repair some of the damage, eventually the degenerative effects of the attacks become too much and the axon loses its ability to send any sort of usable signal. Like any wire, the resulting signal is damaged or unusable when the exterior insulation breaks down. And, again like wire, you can only duct tape around a damaged area so many times before the line is no good.

The initial onset and symptoms of MS can vary drastically, depending on which nerve fibers have been affected. It is estimated that as many as 80% of MS patients initially suffer from relapsing-remitting (RR) MS, which causes a series of MS related attacks followed by weeks or decades of remission. The remaining MS patients suffer from primary-progressive (PP) MS, a degenerative and debilitating form of the disease. Many RR-MS patients will eventually begin to suffer cumulative degenerative effects, and are then referred to as secondary-progressive (SP) MS. Possibly the most severe, progressive-relapsing (PR) MS is marked by a steady decline in function and periodic attacks.

Regardless of the severity, many patients deal with many of the same symptoms, including:

·      Numbness and/or prickling pain, especially in the extremities

·      Problems with coordination/loss of balance

·      Lhermitte’s sign – “barber chair phenomenon,” tingling sensation felt down the back and into the limbs that generally follows head bending and rotation

It is interesting to note that many patients experience Uhthoff’s phenomenon, a worsening of symptoms when exposed to heat, either from fever, exercise, weather, saunas, etc. Also interesting, pregnancy can reduce the number of relapses; however, no overall link to long-term disability has been found.

It is no wonder that MS has remained a mystery. The number of symptoms, varied timetables for progression, and complexity of the condition has left researchers somewhat scrambling to find a cause. It doesn’t appear to be genetic, but 30% of identical twins develop MS if they have a sibling with the disease (compared to 4% for non-identical). The disease is more prevalent in European whites, but people can acquire the risk of their new homeland if they move at certain times of your life. A high instance of cases report a previous history of Epstein-Barr (mononucleosis) and certain vaccinations, but no statistical link has ever been found. Depending on which research you read, women are two or three times more likely to develop MS than men, suggesting a connection to hormones or sex chromosomes. And, as with any condition, general health comes into play; inactivity, lack of sun exposure, poor hygiene and smoking all have possible links to MS.

So what is the cause? Well, that is the million-dollar question, and nearly 2.5 million people worldwide are waiting for an answer. Maybe it was just where your ancestors lived. Maybe it is the result of some dormant virus. Maybe a variety of genetic factors predisposes individuals to react adversely to a set of environmental factors, essentially creating the perfect storm of risk factors. Whatever the answer, the next question always seems to be the same, “What can I do about MS?”

Margaret had the same question. After years of dealing with lost function and partial paralysis, she finally received the diagnosis of MS. As a nurse, she knew about therapy to help her adapt to life with MS, but she was interested in ways to IMPROVE her life. Realizing that Margaret had the most trouble coordinating movements, her Occupational Therapist (OT), Mary Jones, tried Interactive Metronome® (IM).

IM is a patented and unique training tool that challenges thinking and movement simultaneously, providing real-time millisecond feedback to help synchronize the body’s internal clock. Restoring the critical timing and rhythm to functional brain networks helps to improve neural efficiency and communication. IM has been shown to improve many of the areas that are affected by multiple sclerosis, including: balance, coordination, fine motor skills, fluency, focus, memory, planning and sequencing, spatial awareness, and impulse control.

IM training helped Margaret achieve all of the goals that were set at the beginning of her therapy. She has her garden back. She has her neighborhood walks back. Most importantly, she has her life back. Take it from Margaret, “it feels good to get going again!”