Often upon completing a brief description of the benefits of IM to an individual, which centers on the benefits of increased controlled attention or “on demand focus”, people often ask me why not just drink one of those highly advertised energy drinks. These drinks claim to increase alertness, attention, energy and focus. Drinking an energy drink is much easier when compared to committing to IM training for three weekly hour sessions over a period of 4-5 weeks

In general, the primary claim of these energy drinks is increased alertness. Thus, it is important to understand that alertness is not the same as controlled attention or focus. Given all the claims circulating in the “cognitive enhancement” market place (energy drinks, brain fitness technologies), it is important that the discourse be scientifically-based and grounded in a professional consensus of terms. So let me attempt to add some order to the increasing confusion of terms.

I first turn to the highly respected Annual Review of Psychology for an article published by Posner and Rosthbart (2007).Their comprehensive research review makes a distinction between three different attention networks—alerting, orienting, and executive attention. These three different attention networks are orchestrated by different areas of the brain (see figure below). They also differ in the primary neurotransmitters utilized by each system—alerting (acetylcholine), orienting (norepinephrine), and executive (dopamine). Although related and often working collaboratively, they are different forms of attention. 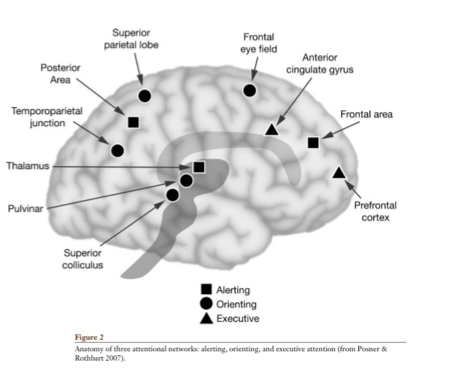 In Posner’s and Rosthbart’s review alerting is defined as achieving and maintaining a state of high sensitivity to incoming stimuli. This is similar to the definition of alertness in the APA (American Psychological Association) Dictionary of Psychology which is “the state of being awake, aware, attentive and prepared to act or react, as opposed to being inattentive or drowsy.” 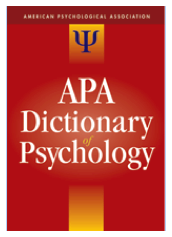 My analogy is the night guard or sentry in a fox hole whose job is to stay alert and perform a constant wide scan of the terrain for sights or sounds of possible activity. Alertness requires a wide scan of the environment and not a narrow selective focus on anything in particular. It is this type of wide-scan attention that energy drinks most likely facilitate.

Then, if the guard hears or see’s something, (s)he will move his head and body in the apparent direction of the stimuli. This is orienting attention, which Posner and Rosthbart describe as the process of improving the perception of the signal by aligning attention with the incoming signal. This definition is consistent with that from the APA Dictionary of Psychology that defines orienting as the act of directing the body or of moving toward an external stimulus.” Although I have no scientific basis upon which I base my statement, it would be my educated guess that increased alertness via consumption of an energy drink might make the orienting response more efficient.

Finally, once oriented, the guard hones in on the source of the sound or light with a very narrow focus…much like a laser beam. The guard may use binoculars or the scope on his/her rifle to magnify the images, narrow down the scope of the stimulation, and to block out other irrelevant stimulation. This is analogous to focus or controlled executive attention which the APA Dictionary of Psychology defines as “the concentration or centering of attention on a stimulus.” This professional dictionary further defines controlled or selective attention, which is the essence of “focus,” as “attention concentrated on certain stimuli in the environment and not others, enabling important stimuli to be distinguished from peripheral or incidental ones.” This type of laser beam focus, with the blocking or suppression of responses to irrelevant stimuli, is the essence of focus and the focus I have described as a core essence of IM training. 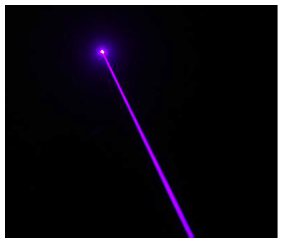 Given the above clarification of terms, I would argue that energy drinks may increase alertness, but being altered does not necessarily mean one is focused. In fact, the definition of alertness is the polar opposite of focus—alertness is a wide scan of all possible incoming stimuli while focus is the narrowing of this scan on a very focused target. One can be alert and not focused, one can be alert and focused, but I doubt if one can be un-alert and focused.

Focus is the laser beam of attentionand is a brain tool that requires considerable practice and effort to attain, with the reported maximum period of focus being in the range of 20-30 minutes. It is quite difficult to turn off irrelevant thoughts and stay “locked on” cognitive tasks. To develop and maintain the ability to control attention and engage in “on-demand focus” cannot be attained simply by drinking a special drink—it requires regular sustained, motivated practice with appropriate training methods and technologies (e.g., IM, mindfulness meditation). Just like weight loss, there is no magic, simple bullet or secret elixir to shed pounds. The consensus is that to lose weight one must alter one’s diet and engage in regular exercise. So it is with increasing one’s focus. It requires sustained, regular exercise and practice.