I have been reading Winfred Gallagher’s 2009 book “RAPT:  Attention and the focused life.”  In many of my blog posts I maintain that Interactive Metronome (IM) training requires controlled attention—focus.  I have further suggested that “on demand focus” is a potentially powerful tool.  By this I mean one wants to train your brain to invoke focused attention when facing cognitively demanding tasks.  However, 100% laser beam focus is not attainable, nor would one want to constantly be super focused.   The mind wandering of the default brain networkneeds to be shut down to focus.  However, unfettered mind wandering can allow for creative thought (and also the flip side—ruminations of irrational or bad thoughts).

A bit of Research: Children with ADHD have an impaired sense of time?

Humans perceive time. We use this ability to predict what is coming, to think about how we will react, and then to respond in a timely fashion. It is well-documented that children with ADHD have an impaired sense of time. Areas of the brain that control our perception of time are affected in children with ADHD (i.e., working memory). In an article published in the Journal of Child Psychology and Psychiatry, researchers found that children with ADHD who also have a Reading Disorder have even more difficulty with timing skills. Research has shown that Interactive Metronome, a training program that addresses the underlying problem with timing in the brain, improves symptoms of ADHD and reading.

“Time is essential to speech”

“Time is essential to speech.” This study by de Cheveigne (2003) makes clear that in order to understand speech, the brain depends upon its internal clock (or what is known as temporal processing) to decipher at a minimum: 1) whether the left or right ear heard it first or which direction the voice came from, 2) pitch and intonation or WHO is speaking, 3) each individual sound within each word, 4) how the sounds blend together to make each word, including whether each sound is a vowel, consonant, voiced, voiceless, and 5) whether there are pauses between sounds and words that add emphasis or meaning. When timing in the brain or temporal processing is off by just milliseconds, a person may have difficulty processing and understanding speech. Interactive Metronome is a patented program that addresses the underlying problem in Auditory Processing Disorders, tuning the internal clock to the millisecond in order to more accurately perceive speech.

Often upon completing a brief description of the benefits of IM to an individual, which centers on the benefits of increased controlled attention or “on demand focus”, people often ask me why not just drink one of those highly advertised energy drinks. These drinks claim to increase alertness, attention, energy and focus. Drinking an energy drink is much easier when compared to committing to IM training for three weekly hour sessions over a period of 4-5 weeks

In general, the primary claim of these energy drinks is increased alertness. Thus, it is important to understand that alertness is not the same as controlled attention or focus. Given all the claims circulating in the “cognitive enhancement” market place (energy drinks, brain fitness technologies), it is important that the discourse be scientifically-based and grounded in a professional consensus of terms. So let me attempt to add some order to the increasing confusion of terms.

I first turn to the highly respected Annual Review of Psychologyfor an article published by Posner and Rosthbart (2007).Their comprehensive research review makes a distinction between three different attention networks—alerting, orienting, and executive attention. These three different attention networks are orchestrated by different areas of the brain (see figure below). They also differ in the primary neurotransmitters utilized by each system---alerting (acetylcholine), orienting (norepinephrine), and executive (dopamine). Although related and often...

Time and space are the two fundamental dimensions of our lives. All forms of human behavior require us to process and understand information we receive from our environment in either spatial or temporal patterns. Even though mental timing (temporal processing) research is in a stage of infancy (when compared to spatial processing) important insights regarding the human brain clock have emerged.
Below is a list (albeit incomplete) of some of the major conclusions regarding the human brain clock. The sources for these statements come from my review of the temporal processing and brain clock literature during the past five years. Most of this information has been disseminated at the Brain Clock blog or the Brain Clock Evolving Web of Knowledge (EWOK). The goal of this post is to provide a Readers Digest summary of the major conclusions. This material can serve as a set of "talking points" at your next social event where you can impress your friends and family as you explain why you use the high-tech IM "clapper" (with a cowbell tone no less) either as a provider or as client.
Our brains measure time constantly. It's hard to find any complex human behavior where mental timing is not involved. Timing is required to walk, talk, perform complex movements and coordinate...

It’s all in the Timing… 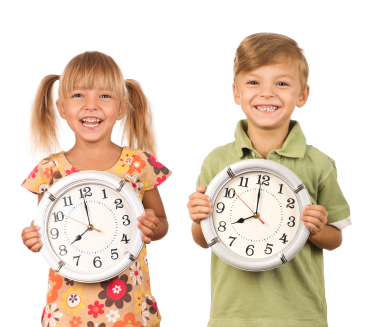 It’s all in the Timing…..
It’s amazing in our culture how many references there are to time or timing… “His timing was just off today”...””Time is money...”Timing is everything”…the list goes on and on. It’s “time” for us to start looking at that on a more personal level. Since time is mentioned so much, it must be important, right?
These phrases all refer to timing as something important for success. When we talk about a quarterback or a pitcher on a team, we know their timing needs to be spot on for accuracy and success. This is what we need for our children with special needs too. Even when we look as simply as our sleep/wake cycles – circadian rhythms– the importance of a sleep wake cycle can make or break someone’s day. Have you ever met a person who was excited that they couldn’t fall to sleep at night? Or how about breathing? When we are comfortable, we are breathing very rhythmically. If we aren’t, we tend to pass out! Even our heart beats out a rhythm on a regular basis.

Featured in Kids Enabled: And the Beat Goes On – How Timing Affects Learning

And the Beat Goes On – How Timing Affects Learning
By Beth Ardell, MPT

The tick-tock of a metronome has long been used by pianists while practicing their craft. Research now suggests that students with learning differences who “stay on beat” can increase their focus, mental processing and cognitive abilities.
Rhythm and research?As infants, we very quickly develop a sense of rhythm. In the games we play and the songs we sing, rhythm is a way for children to learn about their bodies and their environment. For children with learning differences, activities using rhythm are increasingly being used as a tool to increase mental fluency, thereby improving the effectiveness of many brain and body functions. Growing evidence suggests a link between mental timekeeping and cognition and learning. Children diagnosed with dyslexia may have deficiencies in their timing and rhythm abilities, and some researchers believe the connection between time/rhythm and learning may be so significant that a student’s response time to a metronome beat may predict performance on standardized reading tests. Students have demonstrated significant improvements in broad reading and reading fluency, language processing, and even golf performance after participation in a program to improve timing. In addition, studies have indicated improvements in children with ADHD in the areas of attention, motor control, language processing, reading and ability to regulate aggression...