Time and space are the two fundamental dimensions of our lives. All forms of human behavior require us to process and understand information we receive from our environment in either spatial or temporal patterns. Even though mental timing (temporal processing) research is in a stage of infancy (when compared to spatial processing) important insights regarding the human brain clock have emerged.

Below is a list (albeit incomplete) of some of the major conclusions regarding the human brain clock. The sources for these statements come from my review of the temporal processing and brain clock literature during the past five years. Most of this information has been disseminated at the Brain Clock blog or the Brain Clock Evolving Web of Knowledge (EWOK). The goal of this post is to provide a Readers Digest summary of the major conclusions. This material can serve as a set of “talking points” at your next social event where you can impress your friends and family as you explain why you use the high-tech IM “clapper” (with a cowbell tone no less) either as a provider or as client.

Our brains measure time constantly. It’s hard to find any complex human behavior where mental timing is not involved. Timing is required to walk, talk, perform complex movements and coordinate information flow across the brain for complex human thought. Think about moving your arm and hand to grasp a coffee cup. The messages to perform this task originate in your brain, which is not directly connected to your arm, hands and fingers. The ability to perform the necessary motor movements is possible only because the mind and extremities are connected via timing. Precisely timed neural messages connect your brain and extremities. You are a time machine. 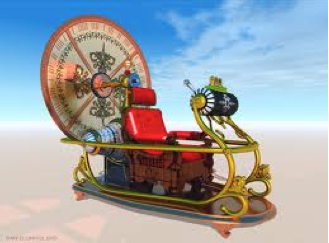 Humans are remarkably proficient at internally perceiving and monitoring time to produce precisely timed behaviors and thinking. “We are aware of how long we have been doing a particular thing, how long it has been since we last slept, and how long it will be until lunch or dinner. We are ready, at any moment, to make complex movements requiring muscle coordination with microsecond accuracy, or to decode temporally complex auditory signals in the form of speech or music. Our timing abilities are impressive…” (Lewis & Walsh, 2005, p. 389).

To deal with time, humans have developed multiple timing systems that are active over more than 10 orders of magnitude with various degrees of precision (see figure below from Buhusi & Meck, 2005). These different timing systems can be classified into three general classes (viz., circadian, interval, and millisecond timing), each associated with different behaviors and brain structures and mechanisms. The fastest timing system (millisecond or interval timing) is involved in a numerous human behaviors such as speech and language, music perception and production, coordinated motor behaviors, attention, and thinking. This fast interval timing system is the most important timing system for understanding and diagnosing clinical disorders and for developing and evaluating effective treatment interventions for educational and rehabilitation settings. It is this timing system, and the relevant research, that is relevant to understanding Interactive Metronome. 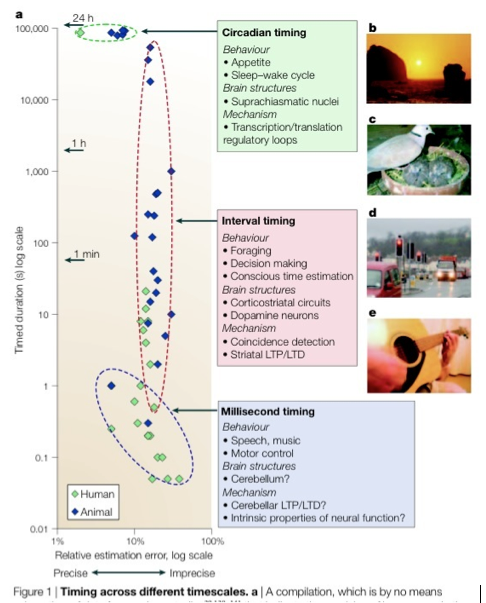 Although there is consensus that the human brain contains some kind of clock, the jury is still out on the exact brain mechanisms and locations. It is also not clear whether there is one functional master clock or a series of clocks deployed in different brain areas. The areas of the brain most consistently associated with milli-second interval mental timing are the cerebellum, anterior cingulate, basal ganglia, the dorsolateral prefrontal cortex, right parietal cortex, motor cortex, and the frontal-striatal loop. That is a mouthful of technical brain terms. But, if you can memorize them and have them roll of your tongue with ease you will “shock and awe” your family and friends. Most of these areas of the brain are illustrated below. Now, if you really want to demonstrate your expertise, get your own illustrated “brain-in-a-pocket”. These images were generated by the free 3D Brain app available for your iPhone or iPad. Even cooler is the fact that you can rotate the images with your finger! You can give neuroanatomy lessons anytime…anywhere! 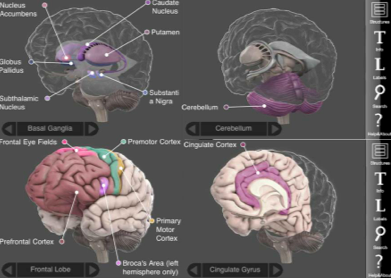 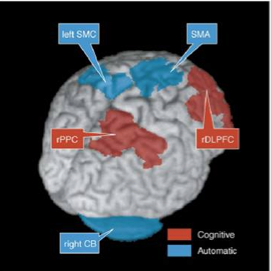 The dominant model in the brain clock research literature is that of a centralized internal clock that functions as per the pacemaker–accumulator model. Briefly, this is a model where an oscillator beating at a fixed frequency generates tics that are detected by a counter. For now I am just going to tease you with an image of this model. You can read more about this model at the Brain Clock blog.

Research suggests that the brain mechanisms underlying mental timing can be fine-tuned (modified) via experience and environmental manipulation. Modifiability of mental interval timing and subsequent transfer suggest a domain-general timing mechanism that, if harnessed via appropriately designed timing-based interventions, may improve human performance in a number of important cognitive and motor domains.