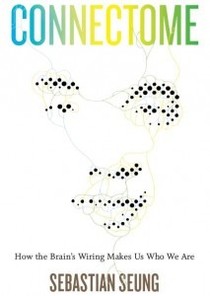 U snooze and you lose. I had received an advanced copy of Sebastian Seung’s Connectome and had hoped to make one of the first book review posts about it. I simply could not find time to read it fast enough and the professionals have already weighed in on the book…so you might as well read their reviews. I have a few minor comments.
I agree with the review in the Wall Street Journal review that this may be one of the best written books on the basics of brain science. Keeping up with contemporary neuroscience and placing it in the context of what I learned during my training and professional experiences has been hard. As I read some of the material that I consider “review” I realized that it was not just a review for me, but it helped my mind see the forrest-from-the-trees re: the neuroscience knowledge I had accumulated—but had not taken time to distill. It is a very good introductory book for the educated lay public on brain science and a nice “organizing review” for professionals.
Another review, which is more an excerpt of of the essence of the book is now also available at the brain fitness heart of the internet–SharpBrains.
My only complaint is that I had hoped it would deal more with the exciting research being completed by the Human Connectome Project. The project receives mention, but Seung then tends to dismiss the approach in favor of his ideas on how to understand the human mind at different level of the connectome. In contrast, I am increasingly excited with the research on brain networks…and ultimately the brain connectome.
Finally, you can listen and watch Seung speaking about connectomes during his TED talk.