Use of the Interactive Metronome in the Rehab Setting 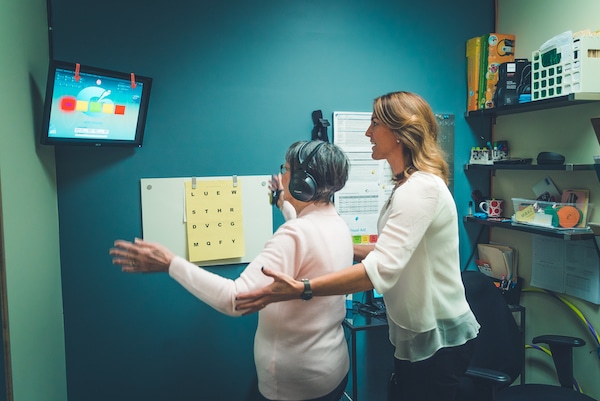 Use of the Interactive Metronome in the Rehab Setting

In today’s rehabilitation setting, the length of stay for patients continues to dwindle. Unlike physical therapy and occupational therapy, speech therapy usually needs more than a traditional 2-3 week stay to show significant changes. Often, rehab patients have difficulty attending to tasks. Attention to task is essential to the success of cognitive-linguistic therapy. The Interactive Metronome (IM) is a computerized program which reflects in milliseconds, the patient’s ability to perform simple motor movements in response to a beat. It was originally designed to improve motor planning and sequencing, but research over the past 12 years has revealed additional benefits (e.g., improvements in math and reading fluency, improved language processing and higher-level cognitive functions).

Research findings by Nagarajan et al (1998) showed that training on a somato-sensory task produced improvements in auditory interval discrimination tasks. Results of a study by Meegan et al (2000) showed that training on an auditory task resulted in motor task improvements. Taub, McGrew, and Keith (2007) revealed that after 12 sessions of IM therapy, elementary and high school students improved their reading and math scores. These studies have shown that improved timing leads to improved motor and cognitive skills.

Using functional magnetic resonance imaging, researchers found that the cingulate gyrus (attention/cognitive flexibility), basal ganglia (integration of thought and movement), and medial brainstem (neuro-motor pipeline) are activated during IM treatment. Hergenhahn and Olson (1997) have stated that neural pathways can either become strengthened or weakened based on use.They postulated that plasticity of the brain is the basis for changes in behavior and learning. IM treatment provides neuronal stimulation and leads to enhanced attention and concentration which are the building blocks of physical and mental activity.

Mauk and Buonomano (2004) have suggested that “timing and spatial processing are intrinsic properties of neuronal functions.” They also stated that “a complete understanding of sensory and motor processing requires characterization of how the nervous system processes time in tens to hundreds of milliseconds.” IM provides feedback at the crucial millisecond level unlike any other SLP therapy.

Over the course of the last three years, use of the IM has increased in our facility. Licensed occupational, physical, and speech therapists have used the device for patients experiencing losses in cognition, motor control, and balance. IM therapy has been used with patients diagnosed with: stroke, head injury, Parkinson’s, and multiple sclerosis. Our speech therapy department has used the IM with 25 patients. To date, all have experienced some benefit from the treatment. Twenty percent of the patients had received previous cognitive-linguistic therapy but were unable to return to work due to continued cognitive deficits. Following therapy with the IM, four of the five returned to full-time employment. Of the remaining 20 patients, 15 insisted on continuing the IM on an outpatient basis. The patient breakdown per diagnosis is as follows:

The addition of the Interactive Metronome to our department has given us a meaningful, measurable way to work on low-level areas (e.g., attention to task, following of one-step commands in the presence of profound aphasia) as well as higher-level cognitive tasks (e.g., divided attention). Comments from patients have been extremely positive. IM is an efficient tool, improving overall attention and concentration, allowing other areas of therapy to progress.