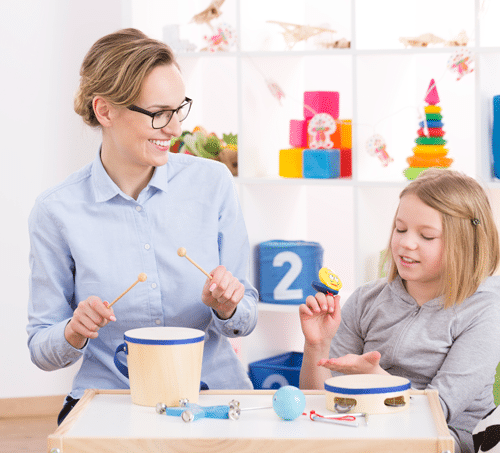 RESULTS:
Simply drumming to a isochronous beat had no impact on recall of rhythmic patterns. Children who performed better at drumming to the beat of music were better at both drumming to a beat and remembering rhythmic patterns. However, children who were able to clap in time with a steady beat with the least amount of variability in their synchronization (due to real time millisecond feedback from Interactive Metronome) demonstrated better ability to drum to a beat, recall rhythmic patterns & drum to the beat of music. According to Dr Nina Kraus, rhythm is complicated, there are several rhythm intelligences, & Interactive Metronome, by itself, impacts all of these vital rhythms that are so important to the development of language and literacy. “Several clinical populations exhibit timing deficits that co-occur with to language deficits; for example, individuals with reading impairment often struggle to tap along to an isochronous beat. It is conceivable that clapping in time to feedback could be a viable intervention for populations with distinct rhythmic deficits (such as one group who struggles to synchronize to a beat and another who struggles to remember rhythmic patterns).” The authors hypothesize that the perception & production of rhythm begins as a global skill early and becomes more specialized later in life. This is in line with previous IM research and the IM Indicator Table data.