By Sarah Pusateri  | Tuesday August 7, 2012
When Fred Davis lost both of his legs to infection –he thought his walking days were over.
Then he was introduced to a therapy that combines movement and timing to help the brain redevelop motor skills.
It’s called Interactive Metronome. For six months, Mederi Caretender therapist Tameka Walker has been helping Davis relearn to walk.
"Left hand, right toe, left hand, right toe. Got it?” she instructs.
To the chime of a cowbell, Davis steps one foot forward on a mat – and then pulls it back. Then, it’s the other foot, always sticking to the beat.
If his rhythm is off, he hears an unpleasant buzz. 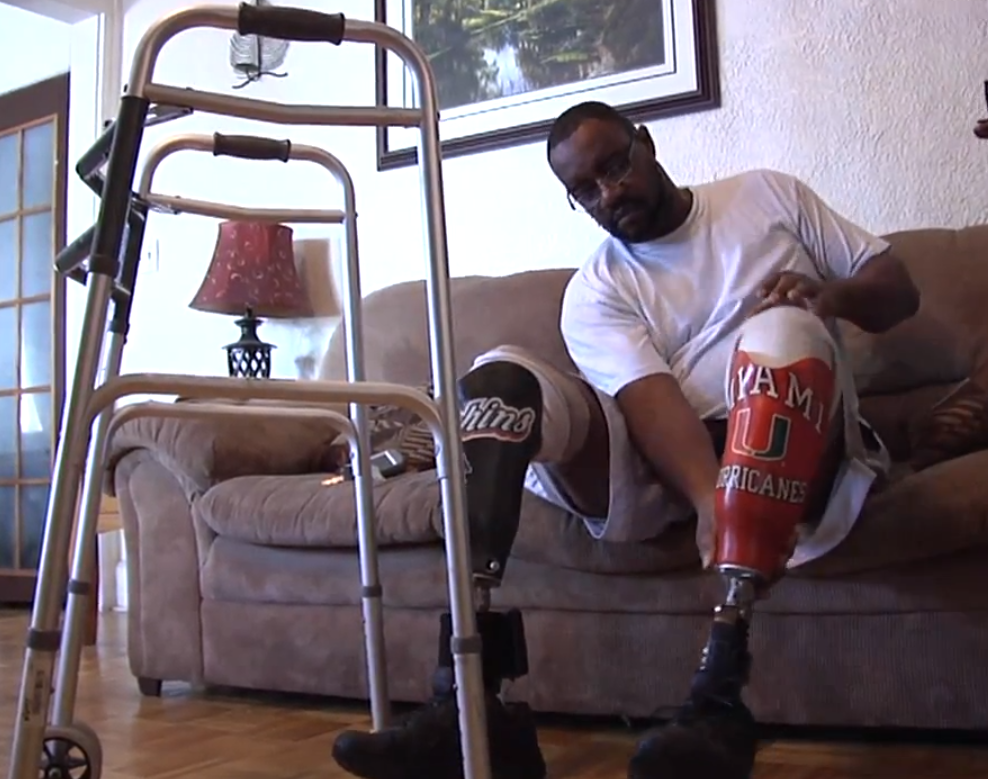 Davis suffers from diabetes. In 2005 — he injured his toe. The untreated injury led to gangrene and an eventual amputation.
In February of this year, another injury led to the loss of his right leg.
"We take walking, running for granted. But when you lose both your limbs — it becomes a little difficult," Davis says.
The computer-based system helps the brain regain cognitive, behavioral, and motor skills.
Therapist Timeka Walker says she's witnessed this first hand in Davis, during their sessions twice a week.
"What is does is it helps with the timing for your mind and your feet to think together,” she says.
“He had difficulty with sit to stand, getting up off the couch, so we started off small."
Davis wears prosthetics that start right below the knee. Sometimes the exercise requires he slap his side to the rhythm — while wearing sensors on his arms and legs.
The information is stored in a computer and he's able to measure his progress.
Now he's worked up to walking with the aid of a walker – and he's trained his brain to step to that same beat. This makes it so he's able to walk and not fall.
Falling is a huge obstacle for amputees to overcome, according to Jason Highsmith of the USF School of Physical Therapy and Rehabilitation.
"Amputees fall and they fall a lot," he says.
He uses a similar program to rehabilitate his patients.
"We've tried a variety of things including metronomes on stairs and we've had great success,” he says.
“We've used it in that environment because that's been one of the more safety compromising environments we've looked at. It's great to have it in the rehabilitation arsenal."
For now, Davis is sticking to flat land with his therapy — and it's working.
He's now able to walk to the park with his grand kids, something he thought was a thing of past.
"I thought I would never be able to do the things I used to do,” he says. “Driving, just getting out and walking, I thought I would be confined to a wheelchair."
By Christmas, Davis has a new goal: he's going to play basketball.
For now, he'll continue to recover, one step at a time.
{"video":"http://www.youtube.com/watch?v=W2eRsYtF1zs&feature=youtu.be","width":"400","height":"300"}
Read the Story on WUSF News