Is the P-FIT it? Part 1—The P-FIT model described 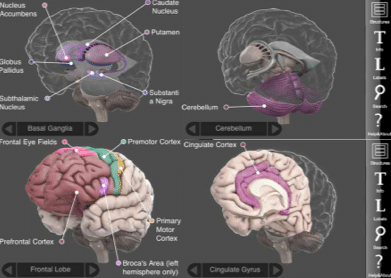 [Note – this is the first in a series of posts intended to present an integration of intelligence, cognitive neuroscience, and applied neuroscience research with the goal to advance a set of hypotheses or model(s) that explain how the Interactive Metronome® (IM) technology results in improved cognitive functioning—specifically focus or controlled attention]

Although the CHC taxonomy provides a useful description and nomenclature for describing and measuring intelligence, it provides little guidance regarding the underlying brain mechanisms that account for differences in human intelligence.  During the past few decades brain imaging research has started to map psychometric intelligence constructs (g or general intelligence, Gc-crystallized intelligence; Gf-fluid intelligence; Gv-visual-spatial processing; see Colom, Haier, Head, Alvarez-Linera, Quiroga, Shih & Jung, 2009) to brain structures and networks.  In the context of applied neuroscience research, the law of individual differences is captured by the conclusion that “the brains of some people are more efficient than those of others” (Deary, Penke & Johnson, 2010, p. 210; emphasis added).  This conclusion, based on structural and functional brain-imaging studies, is also consistent with the neural efficiency hypothesis of Jensen.

As discussed previously in a prior post (Brain or neural efficiency:  Is it quickness or timing?):

The neural efficiency hypothesis states that the faster the brain’s synapses fire the more efficient and faster the transmission of information within the brain, both at the level of individual nerve synapses and eventually at the level of fine-tuned communication across the various brain networks.  Neural efficiency is not a thing or structure of the brain but an indicator of how well the brain is working.  For example, in most cars the engine parts are generally the same.  There is no “horsepower” part, but the collective synchronization of the various parts of the engine produce different levels of horsepower for different engines or the same engine under different conditions.  In simple terms, neural efficiency is analogous to mental efficiency or horsepower.  The neural efficiency hypothesis has been the dominant theory for explaining differences in general intelligence.  It is associated with one of the most prominent intelligence scholars for decades, Dr. Arthur Jensen.

Probably the most empirically-based neuroscience model of human intelligence to emerge is the parietal-frontal integration theory (P-FIT) advanced by Jung, Haeir, Colom and colleagues (Colom et al., 2009; Jung & Haier, 2007).  The P-FIT model is based on a synthesis of over three dozen brain imaging-psychometric intelligence research studies.  These studies used a variety of brain imaging techniques such as structural and functional MRI, diffusion tensor MRI, magnetic resonance spectroscopy, and positron emission tomography studies (Deary, 2012).

The details and nuances of the P-FIT model of intelligence cannot be covered here.  Interested readers should consult the work of Deary et al. (2010), Jung and Haeir (2007) and Colom et al. (2009).  The important conclusion to date is that this program of research has established correlations between individual differences in general intelligence (g; and also the CHC domains of Gf, Gc and Gv) and certain core brain networks.  In particular, the model suggests that general intelligence, which has been related to the concept of neural efficiency, is primarily a function of the efficient flow of information between the dorsolateral prefrontal cortex, parietal lobe, anterior cingulate cortex and specific regions in the temporal and occipital cortices.  [Figure from Deary et al., 2010] 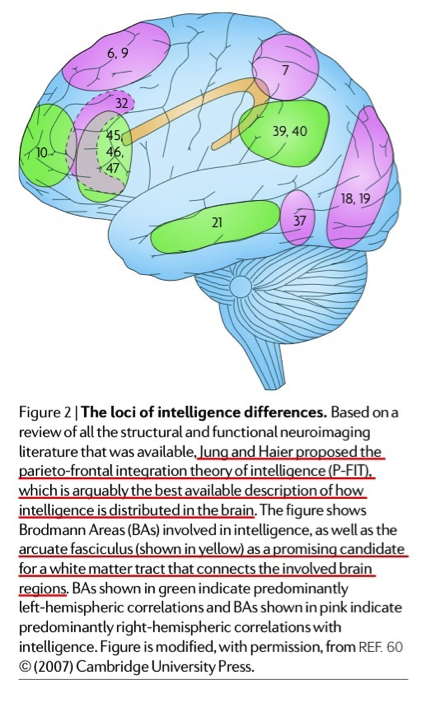 According to Deary et al. (2010), the “P-FIT can be considered the best available answer to the question of where in the brain intelligence resides” (p. 207).  More importantly:

“There is an emerging consensus that intelligence does not reside in a single, narrowly circumscribed brain region such as the frontal lobe. Rather,intelligence seems to be best described as a small-world network. This model implies that high intelligence probably requires undisrupted information transfer among the involved brain regions along white matter fibres” (p. 207; emphasis added)

This conclusion is consistent with, and reinforces, the recent large-scale brain network research discussed in a prior post (The brain as a set of networks:  Can you fine-tune your brain?).  Of particular interest is the conclusion from large-scale brain network studies (see Bressler & Menon, 2010 in prior post) is that of the three primary identified networks (default, salience, central-executive), the central executive network “is engaged in higher-order cognitive and attentional control.”  In other words, when you must engage your conscious brain to work on a problem, place information in your working memory as you think, focus your attention on a task or problem, etc., you are “thinking” and must focus your controlled attention. [Image from Bresslor and Menon, 2010; see prior post link above]. 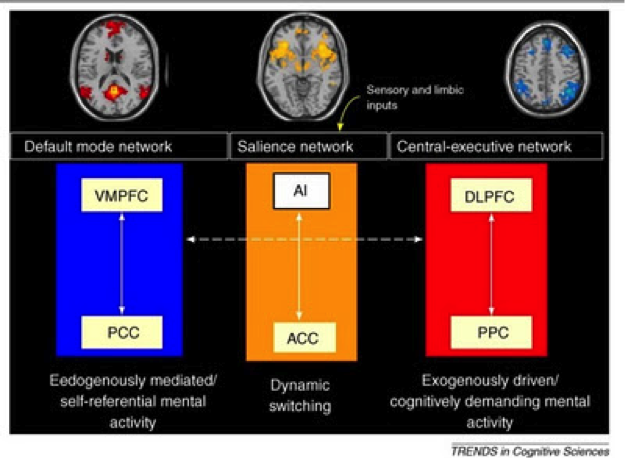 The goal of this series is not to delve into complex brain function terminology or analysis of brain structures and networks.  Future posts in the “Is the P-FIT it?” series will link the neuroscience-based P-FIT model of general intelligence with remarkably similar neurocognitive and neuroscience based research findings that account for the links between working memory and reasoning/general intelligence, ADHD, certain forms of meditation, and the pivotal role of controlled executive attention (aka, focus) in working memory—which, in turns, results in improved cognitive or intellectual performance.