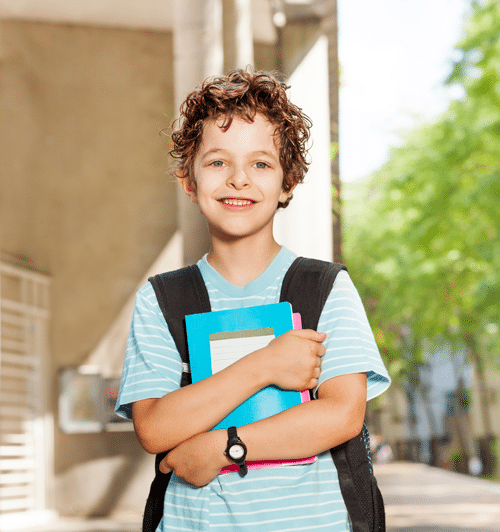 Sam is an 8 year, 9 month old male with no significant medical history. Born at 38 weeks gestation, with a birth weight of 8 pounds, 9 ounces, he achieved developmental milestones on time. He  has a history of frequent ear infections, but no PE tubes were placed. Sam is not currently taking any medication. At this time, he receives speech therapy for phonemic awareness and articulation and is diagnosed with ADHD. He has an IEP which allows him additional time for completion of tasks and help for speech-related issues. Sam is experiencing difficulty with reading/decoding/spelling, staying on task, and with writing skills. His Developmental Reading Assessment (DRA) level is 12, which places his reading ability at the middle of a 1st grade (he is in the 3rd grade). Sam receives tutoring one time per week before school by his teacher. Sam enjoys karate, but he is always a few seconds behind his peers in timing of movements.

Sam is in the 3rd grade and is achieving below grade level in all academic areas. He presents with normal muscle tone, full active range of motion and poor motor planning skills. He exhibits decreased core strength in prone extension and supine flexion. He is able to hold prone extension for 12 seconds (average is 63-77) and supine flexion for 15 seconds (average is 46 seconds). He can balance on one leg for 10 seconds each without trunk sway. His ATNR reflex is not yet integrated. Sam is right hand dominant and holds a pencil in a tripod grasp. He has difficulty writing the letters of the alphabet in print and frequently receives complaints from his teacher about legibility. Sam is easily distracted. He scores below average on all three of the subtests on the Beery Buktenica Developmental Test of Visual Motor Integration. On the Sensory Profile, he scores in the Typical Performance category for all areas.

Sam’s initial IM Long Form Assessment showed an overall score of 268 ms, with 82% of his hits early and 18% late. He demonstrated greater difficulty with timing in his lower extremities. His Attend over Time Test average was 257 ms. Sam required maximum prompts to sustain attention and persist through the entire test.  He completed 24 sessions of IM training in the clinic, attending three times per week. Because he was initially not motivated to participate, modifications were introduced to IM training and rewards were implemented.  Sam required hand-over-hand assistance to complete the first two sessions, but was able to complete tasks independently by session 3 although his timing remained markedly off-beat. His motivation improved after the first week and he exclaimed that his teacher moved him up into the next reading group! He continued to require edibles to motivate him to give full effort during weeks 2 and 3. After week 4, another IM LFA was administered. His overall timing average was 136 ms (improved from 268 ms). At this time, Sam’s mom reported that his attention to task after school and during karate was better, and he required fewer prompts to redirect his attention. His teacher reported that he moved up 2 reading groups at school and that his attention was improved.

Sam completed weeks 4-6 of IM training independently in the clinic, with no edible reinforcements required. He wanted to graduate from IM, which helped improve his attitude towards completing the longer 1000+ repetition tasks. After 24 sessions of IM, all of his scores improved to less than 60 ms, with his overall average at 48 ms. Sam achieved 55% of early hits and 45% late. His reading scores improved from a DRA level of 12 to 21, and his teacher remarked that he is more eager to read aloud in class and exhibits better articulation.

Sam was reassessed using the VMI and Sensory Profile and scored in the average range in all areas upon completion of IM training.

A 6 month follow-up call was made to Sam and his family. They stated that Sam is now at level in reading, and his attention is only a struggle at school when it is a very busy environment. He performs his karate moves without delay.

Do you have an IM Success Story to Share? Send us your story today!