A “Real Birthday Party” was in order for Raymond this Year!

A “Real Birthday Party” was in order for Raymond this Year! 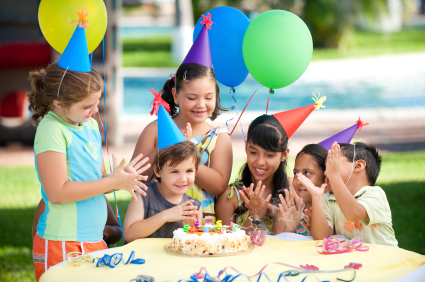 Several years ago, I met a 9-year-old boy named “Raymond”, who had recently been diagnosed with Aspergers Syndrome. He was very bright and got A’s in classes like math and history. Raymond knew a lot about video games and video game systems, and was willing to tell you every detail about them. He also confided in me that he had no friends and that kids laughed at him and turned the other way when he came over to them. The reason that he came to me was that his handwriting was illegible and very slow. And during his OT evaluation, I discovered that his coordination was well below age level (much more like a 4 year old) and that he had weakness throughout his body. I also noticed that his focus and concentration was very poor for non-preferred topics.

His parent’s didn’t really see the differences in their son at first. Raymond was an only child and seemed to be more of a “book worm” than the athletic type to them. They enjoyed his company and listening to their son talk about the inner workings of various video game systems. It was his 4th grade teacher that thought a trip to the Neurologist was in order. She saw that he struggled focusing and with social relationships at school. She also got a report from his gym teacher that he could not keep up with the other students and lacked interest and participation in class. After a trip to the Neurologist, Raymond was diagnosed with a mild form of Asperger’s Syndrome and it was recommended that he receive an evaluation by an Occupational Therapist to work on handwriting skills and strength.

When Raymond was evaluated, I could see that his coordination and timing was off. He was actually fearful of a ball being tossed to him because he had couldn’t catch them and had been hit too many times throughout his life. We decided that getting started with a round of IM sessions would be beneficial to this child. We would be able to address his coordination, timing, focus and attention. Since computers/video games were of great interest to him, we thought it would be a good match for treatment. We completed 15 sessions of IM, and after the 4th-5th session, his Dad reported that they were noticing an increase in written output during homework time. Raymond’s teacher was very pleased that she could read his writing on spelling tests and journal writing. I started to hear stories about interactions with other children at school, and even a play date was planned. My own interactions with him showed me that he was starting to listen during conversations instead of just giving information. Physically, we discovered that he enjoyed doing some of his IM exercises while seated on the therapy ball, and we carried this over into his home program to help with overall strengthening. He then began playing catch with his dad on Saturday’s. Raymond was able to gain confidence in his ability to play and interact with others. He seemed to know when it was appropriate to involve himself in a conversation and when to listen which had been a huge problem when attempting to interact with the other kids.

With the use of IM as a therapy tool, this child made large amounts of progress very quickly. As we addressed his underlying timing and coordination issues, he improved in all other areas as well! It was very exciting to meet with him each week and hear about his progress. On our last visit together, he came in with a very neatly written list of friends and supplies for his 10th birthday party. He had only ever celebrated with his family before, but this year he requested a “real birthday party” to celebrate with his friends!